DEFINITION: Prophets were spokesmen for God, with a message inspired by His Spirit that often included predictions about near and remote events. Their prophecies, given orally at first, were often written down and included in the Scriptures.

When Elijah confronted the people of Israel at Mt. Carmel concerning their worship of Baal, he became the prototype for understanding the essence of biblical prophecy (1 Kg 18). The prophets who preceded Elijah mainly functioned as inside supporters of Israel’s religion and leaders (Moses, Samuel, and Nathan come to mind). After Elijah, the prophets mainly were outsiders, independent of Israel’s kings and priests and challengers of the status quo (Isaiah, Jeremiah, and Ezekiel come to mind). The typical prophetic confrontation began with a stern, “thus saith the Lord,” a phrase found more than 400 times in the familiar King James Version.

The main function of biblical prophecy therefore was to “forthtell” the mind of God concerning His holiness. The prophets expressed the Lord’s longing for His people to order their moral and spiritual lives around what He valued. The independent prophets were often scorned and their writings were even burned (Jr 36:27). Yet some of them left writings that survived, and these were collected, so that Israel’s Scripture came to be called “the Law and the Prophets.”

God was pleased to reveal certain coming events to the prophets. A secondary function of biblical prophecy was to “foretell.” Often these events occurred in the prophet’s lifetime, and this proved that the Lord was truly speaking through the prophet (as cited in Dt 18:21-22 above). Thus, Isaiah predicted to King Hezekiah that the Assyrian invasion under Sennacherib would fail and that Jerusalem would be spared (Isaiah 37). This function continued during the early Christian period as well, for example, Agabus’s prophecy of a coming famine (Ac 11:28). Jesus’ prophecy of Jerusalem’s fall, fulfilled in AD 70, may also fit this category (Mt 24:2).

The second kind of prophetic prediction foresaw events that lay beyond the prophet’s lifetime. These remote prophecies centered on the coming of Israel’s Messiah. That there would be two comings of the Messiah, separated by thousands of years, was not plainly revealed to them. The light of the New Testament makes this clear. For example, Isaiah 53 certainly prophesied Jesus’ death as the Suffering Servant, while Isaiah 65-66 speaks of the final glory that will be. Right interpretation of biblical prophecy, then, requires paying careful attention. First, we must distinguish between moral or spiritual counsel (forthtelling) and prediction (foretelling). Second, we must remember the three settings that are possible for predictions, as noted below. 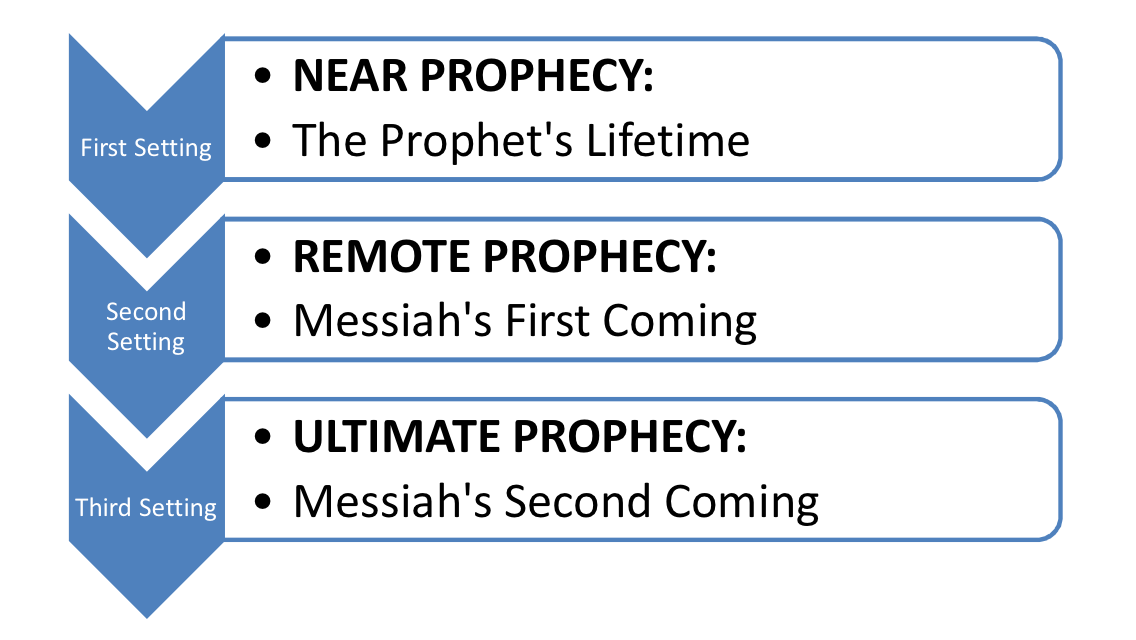 REFLECTION: Which kind of prophecy is more important, forthtelling or foretelling? Why? How important is it for Christians to study the Old Testament prophetic books?

PRAYER: God of the prophets, thank You for Your word that came through such inspired men as Isaiah and Jeremiah. Help me to hear through them any “thus saith the Lord” to which I need to respond. Help me live this day in honor of the Messiah the prophets proclaimed. Amen.

Dave Maniquis is a Teaching Elder at Restoration Church. He holds a BA in History from Rutgers University and an MA in Biblical Studies from Reformed Theological Seminary. He enjoyed a 23-year career in the U.S. Government, working and traveling extensively in Western and Eastern Europe. He has been a Christian for most of his adult life and has been involved in church planting, overseas as well as here in Port Orange, teaching the Bible and speaking into others’ lives with the Gospel. He is married to Maureen and they have two wonderful sons, Dylan and Evan.